What it takes to care for a cow

They will need an adequate shelter, a pasture, and access to their human household when the weather is unusually cold or hot. So if you think you’re ready to take home your new bovine baby, please fill out our adoption application. If you are approved for adoption, you will be directed to our telephone hotline, and can speak to one of our calf counselors with any questions pertaining to calf rearing. 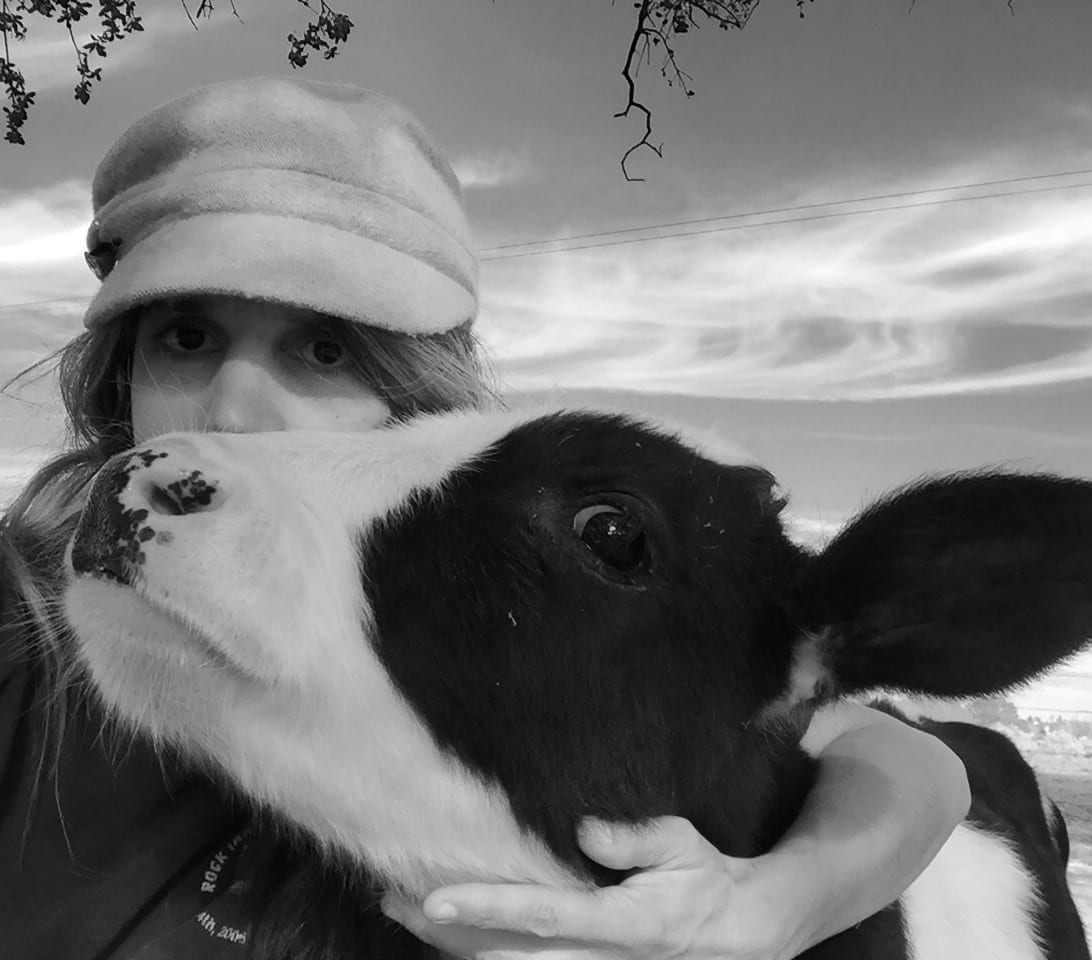 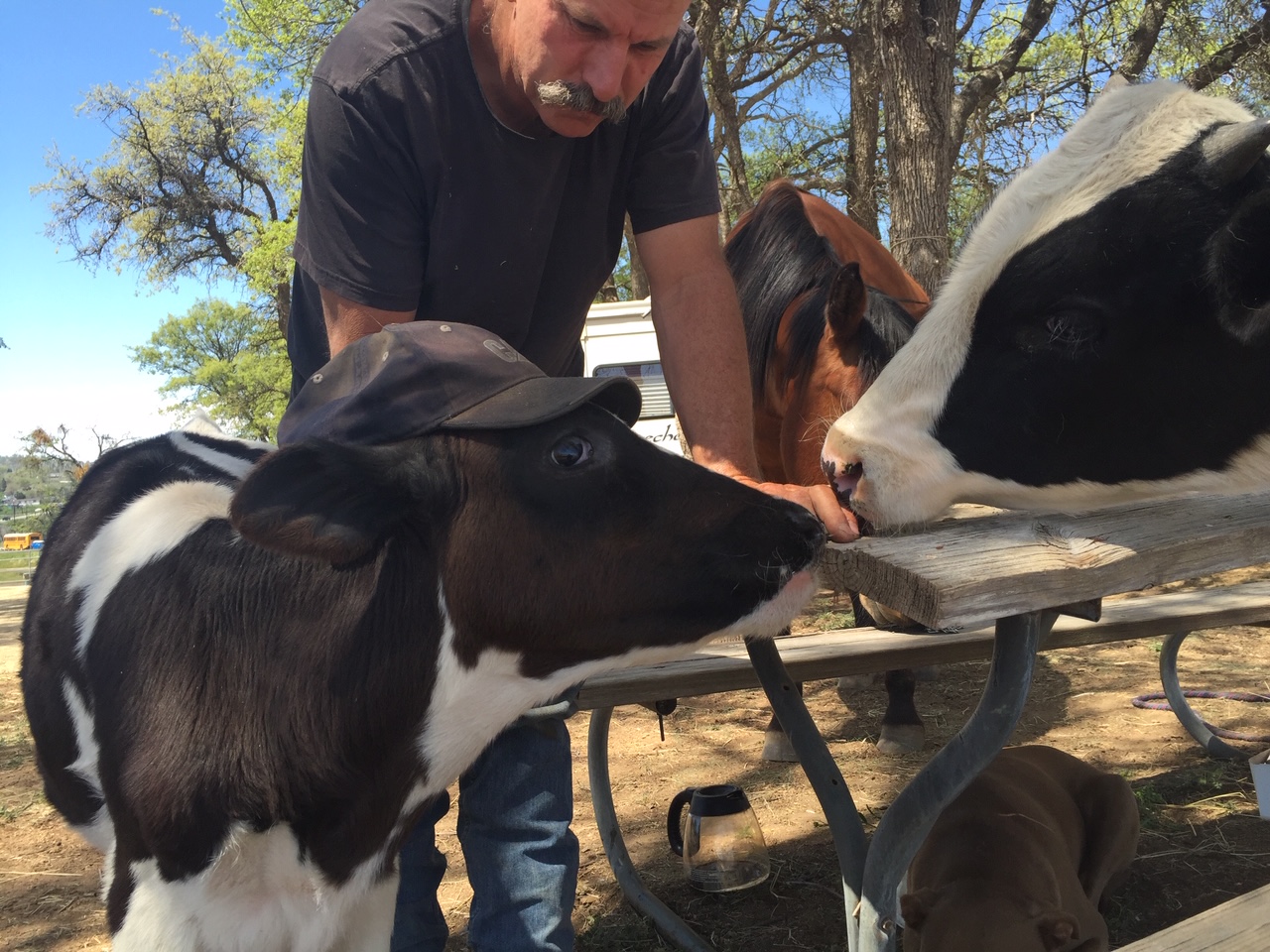 Steps in Adopting a Cow

Our bottle calves are raised in the house for their first 3 months. Upon their rescues they initially all have compromised immune systems because they were removed from their mothers immediately after birth and thus were denied the colostrum that would have ensured them a healthy immune system. At 3 months old they are usually ready to transport to their new homes. If you have no existing bovines on your property, we will adopt out our baby calves in pairs. 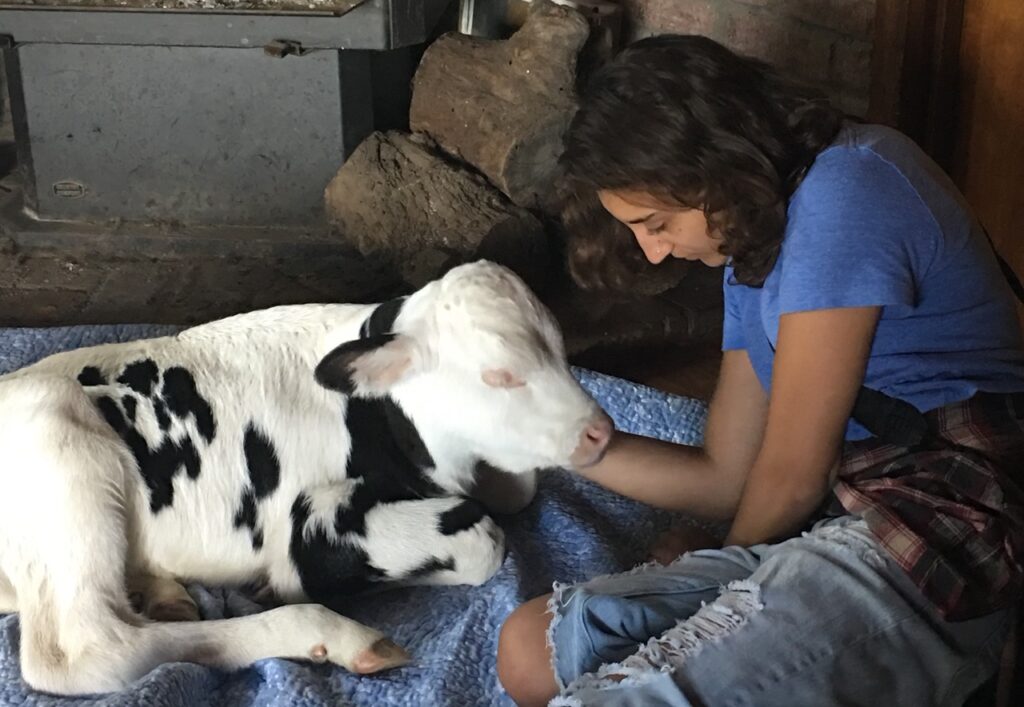 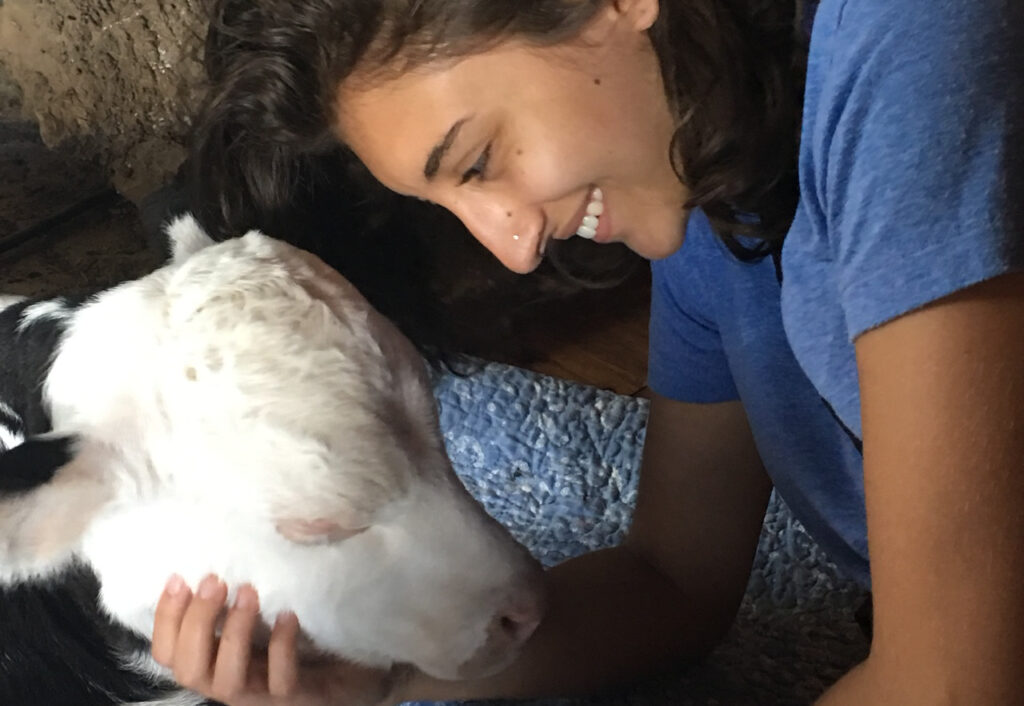 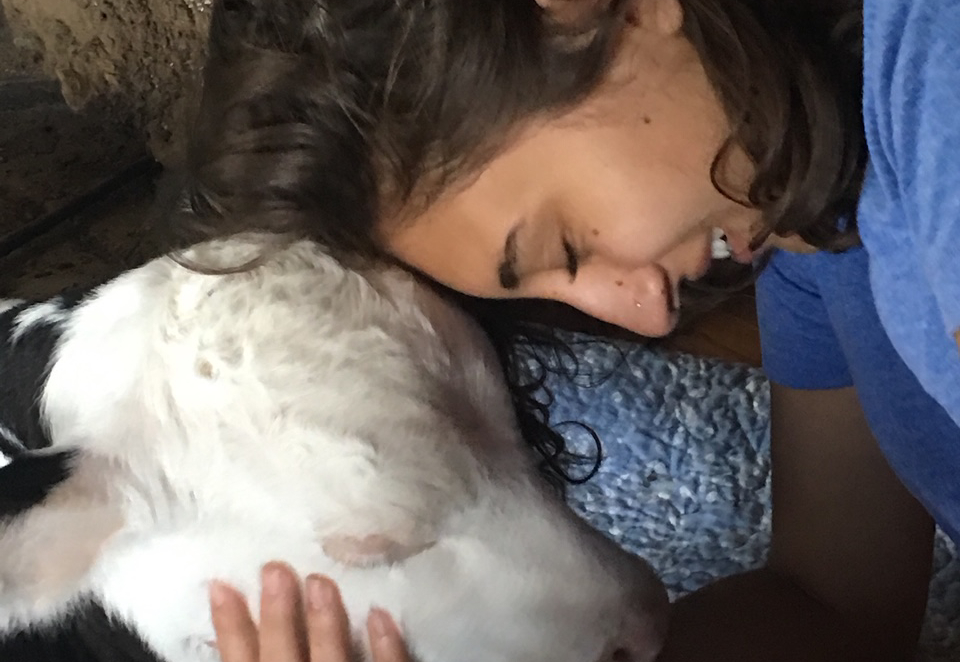 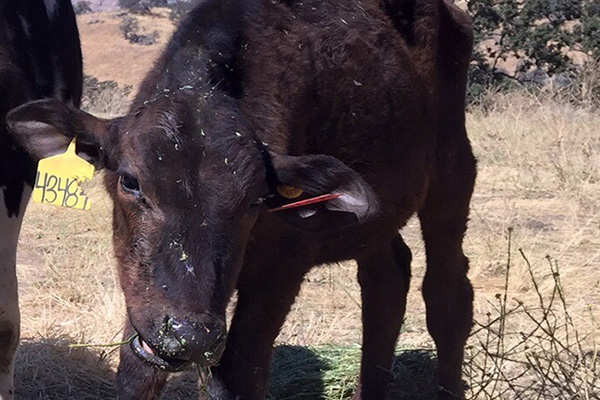 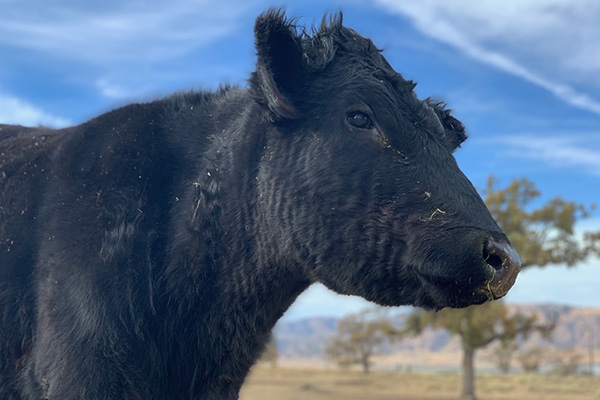 Baby Sid was donated to our rescue by a small feedlot owner who had a change of heart and took pity on the sickest of his cows and decided to give 5 of them a reprieve. Siddhartha, or “Buddha” was by far the most immune system compromised cow from his lot.

Our vet came out to examine and treat all 5 cows the day after their arrival. He diagnosed Sid with Bell’s Palsy and said he was dwarfized by extremely poor nutrition. Poor Baby Sid struggled to see out of one eye and was already completely blind in the other eye, which was blue and infected. He had a social tick and his head, which was always dropped over to one side, shook uncontrollably. He had a serious case of feedlot pneumonia and was grossly underweight. We honestly did not expect Baby Sid to survive but were comforted in knowing that he would die knowing that finally in his life, someone loved and cared for him. Every day his dear friend Moonice, a Holstein heifer who came from the same feedlot, would stand by his side, comforting him and sharing her hay pile with him.  She would often lead him to the top of the hill and lie down next to him under a huge oak tree. Over time, Sid’s symptoms of Bell’s Palsy began subsiding and his pneumonia was cured.

It is now 3 years later and Siddhartha is undoubtedly the most stunning steer at Summer Meadows, our facility for teenage and young adult rescued bovines. He is also the tallest steer and the herd leader. He has no more visible or physical traces of Bell’s Palsy. His vision in both eyes was completely restored.  He can often be found in the meadow, standing triumphantly and looking out over the pastelle colored mountains, Baby Sid is something out of a Matisse painting.

We have never seen such a transformation in any rescued bovine ... and feel that in Baby Sid’s case, love conquered all. Our rescue’s slogan is “Where there is love, there is hope.” Baby Sid’s happy ending serves as a reminder that once an animal knows he/she is truly loved, the impossible is for once, attainable.

Baby Sid is now available for adoption, alongside his most loyal friend,  Moonice. They must leave her together and we will not consider separating them. 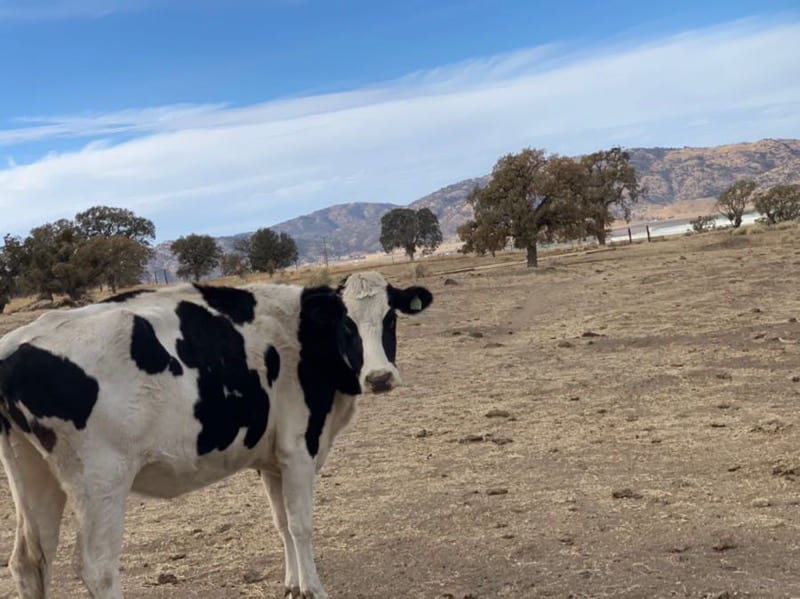 CA’s most run down and unsanitary dairies. At only 1year old it was decided that she would not make a lucrative dairy replacement heifer — thus she was culled out of production and hauled to CA’s most horrIfic dairy cow slaughter sale, “The Dairyman’s Beef Auction.” It was at this revolting Holstein cull cow sale that Moonice caught the eye of the feedlot owner. But once he hauled her and others to his compound, he took pity on poor Moonice and put her in a field with other dairy heifers and cows that were emaciated and sickly and needed convalescence.

Through a bizarre twist of fate the feedlot owner suddenly decided to gift 5 older calves to our rescue. Moonice’s life was spared due to her striking resemblance to a Holstein steer named #10 that we tried to save from another dealer, unsuccessfully.

Initially Moonice suffered from emaciation and feedlot pneumonia but after a visit from our vet and strong dewormer medication and antibiotics she was on a road to recovery. Moonice immediately took to Baby Sid, perhaps due to her latent maternal instinct and need to look after this pathetic dwarfed baby; stricken with Bell’s Palsy and barely holding up his little head, which drooped to one side.

It is now 3 years later and Moonice stands triumphantly over the hillside — her soulmate for life is Baby Sid and thus we are offering them for adoption as a bonded pair. Moonice is the quintessential Holstein cow, with a thick white blaze splashing down her nose and beautiful black cloud markings on her white body. She is a rather timid animal but carries herself with pride and dignity. She would do best in a home that offers a generous grass pasture, for she loves to roam the acreage of Summer Meadows.

Survivor was also at the feedlot with a Baby Sid and Moonice, but when we arrived at the feedlot initially, she was a downer cow. With the help of our friend, the feedlot owner flipped her over on her other side. After we left he used machinery to help lift her and move her to his home property, where he gave  her special care until she miraculously rose to her feet and recovered enough to be transported to our Summer Meadows rescue farm for further convalescence.

Survivor had the worst case of feedlot pneumonia we had ever seen and our vet immediately put her on strong antibiotics and other meds. We noticed that a large star was branded to her — this was her former ranch brand and the feedlot owner told he she came from a small organic dairy. Survivor was tragically living  proof of the organic myth. She arrived with such long feet (that in fact had turned into shoes) that we had to have our farrier set her on the ground in order to trim her shockingly long feet. He laid down next to her for over 2 hours in order to fix 2 years of hoof neglect. He felt she had been left inside a filthy milking parlor barn and not ever let out for the first two years of her life. Since she  had no chance to sharpen her hooves while out on pasture, her hoof growth became chronic and she started to fall apart — at the young age of 2 she suffered from chronic hoof rot and became crippled, and stopped producing enough milk for the dairy to justify keeping her. Thus she was officially “culled” out of production and sold to the feedlot owner. 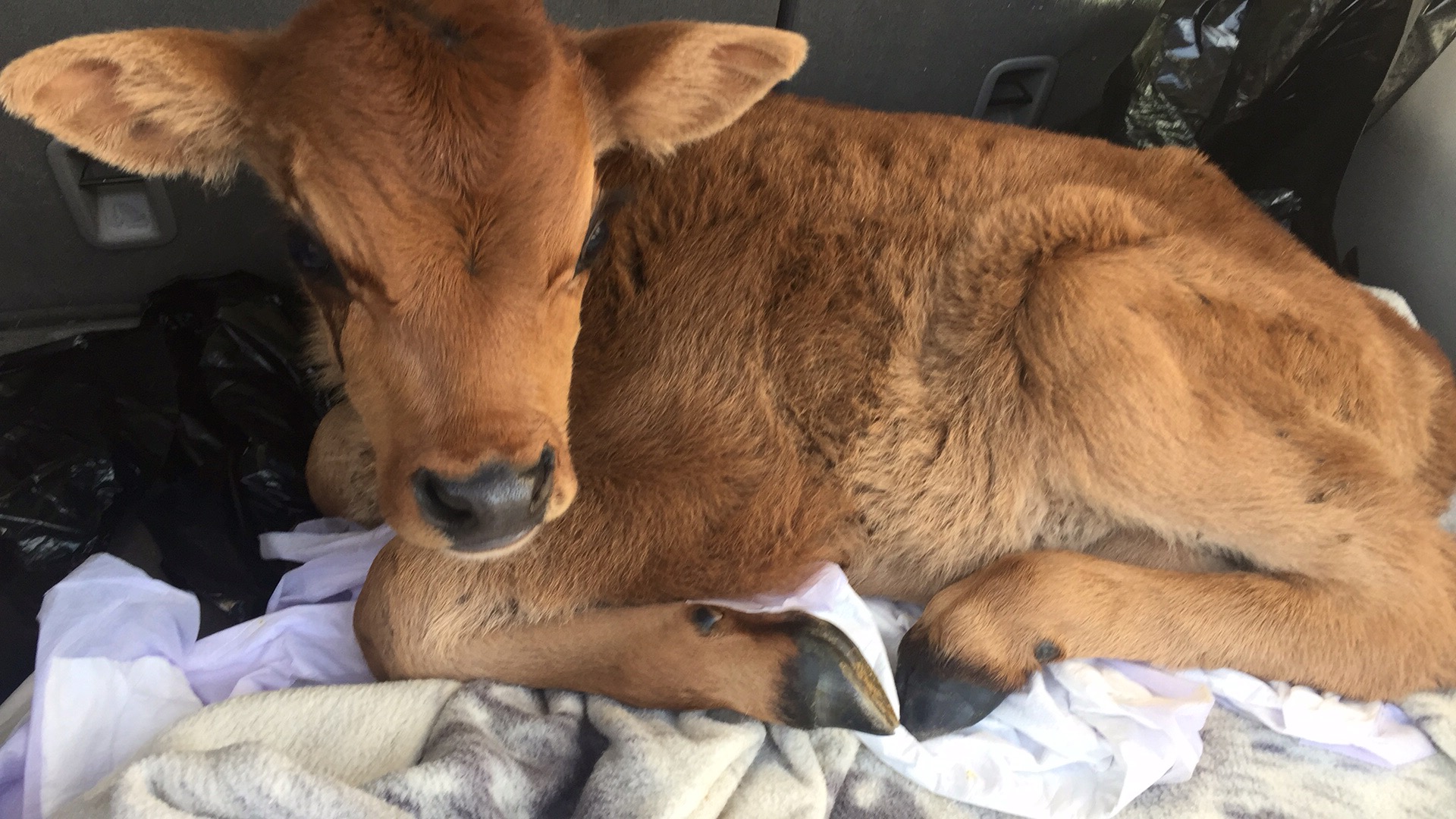 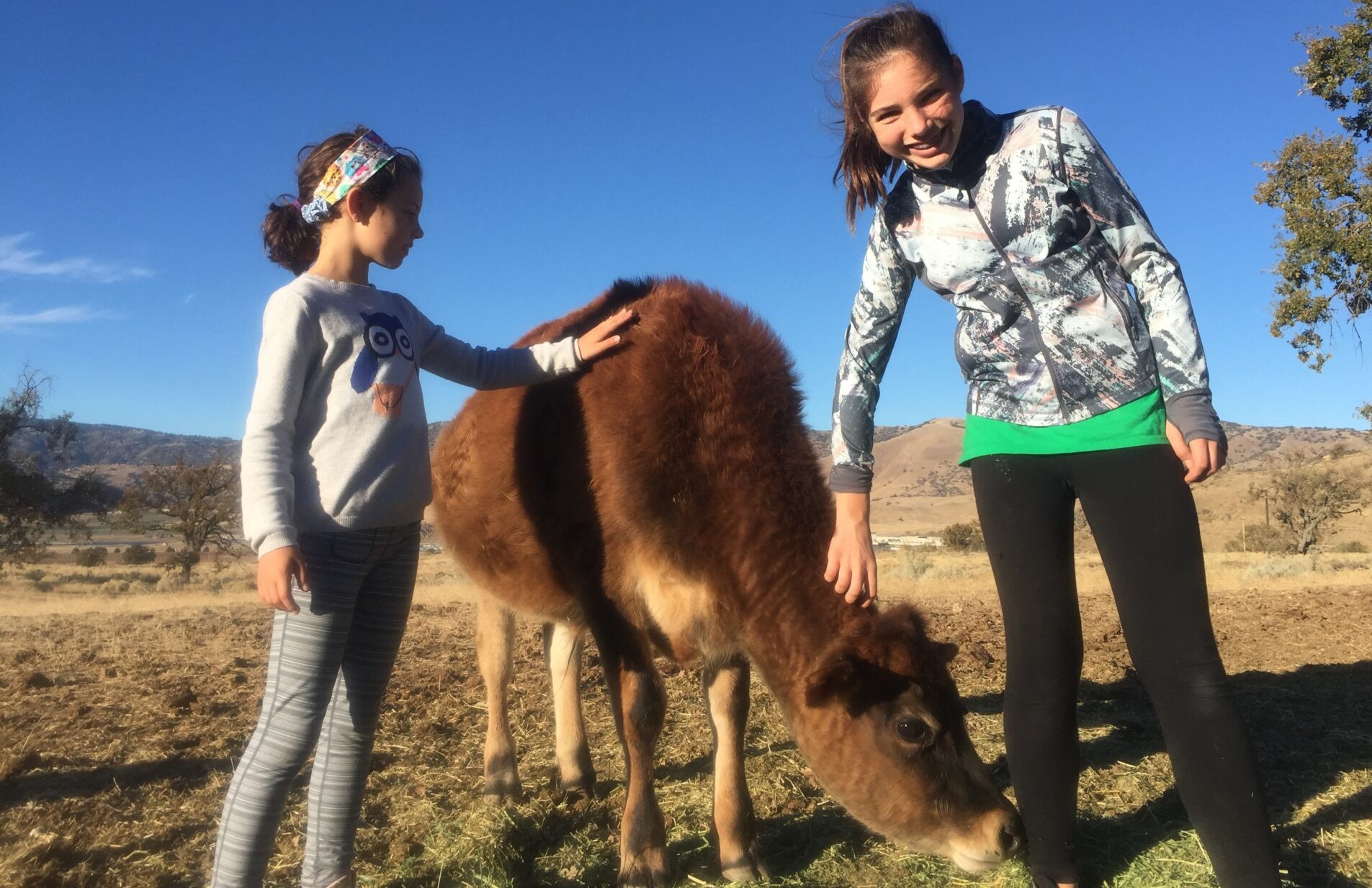 Again, Survivor is living proof of “the humane myth.” She was once being milked and had a calf at an organic “free range” dairy farm. But in the care of her organic farmers she was brought to a place of complete mental and physical breakdown.  Had she been taken to auction, the brand inspector/auction house vet would have deemed her unfit for slaughter and she would have been shot into a dead animal pile.

After 3 years of convalescence at Summer Meadows and in the company of other bovine friends, Survivor is the picture of health, happiness and hope. She enjoys her days in a 20 acre meadow and has become quite affable over the years ... and yes — there is something else — on a cold rainy night in December 2.5 years ago we rushed back from L.A. on the freeway to Summer Meadows to move Survivor and her friends into stalls in the barn but what we found upon our arrival was nothing short of a miracle ... a beautiful baby Jersey calf was standing under the oak tree ... and the calf belonged to Survivor. It appears that in spite of all the horrors she endured while at the oppressive organic dairy, Survivor fought to keep her unborn calf alive.

We named the calf Baby Butterfly Christmas because he was a true Christmas present to Survivor and to us.  His name fit him just perfectly because he used to flutter out of the barn on snowy days in his little black calf blanket like a Christmas Butterfly — it’s now 2 years later and Survivor and Butterfly are enjoying their life together on rolling hills as mother and son.

This is the only calf Survivor ever had that she was allowed to keep. We fed Baby Butterfly supplemental bottles of calf formula because we knew Survivor could not produce enough milk for him after the abuse and neglect she sustained at the dairy farm. Survivor and Baby Butterfly Christmas  are now inseparable and will be adopted out together as a mother-son pair.  Survivor and Baby B are available to an approved forever adoptive home provided that they will be kept together for the rest of their lives. We feel that these two beautiful bovines will bring joy, laughter and love to their future adopters. If you adopt this magical pair you will be sure to look outside your picture window and know that love, hope and happiness are alive in your world.

For if we may quote Buddha,“ Just as treasures are uncovered from the earth, so virtue appears from good deeds, and wisdom appears from a pure and peaceful mind. To walk safely through the maze of human life, one needs the light of wisdom and the guidance of virtue.” 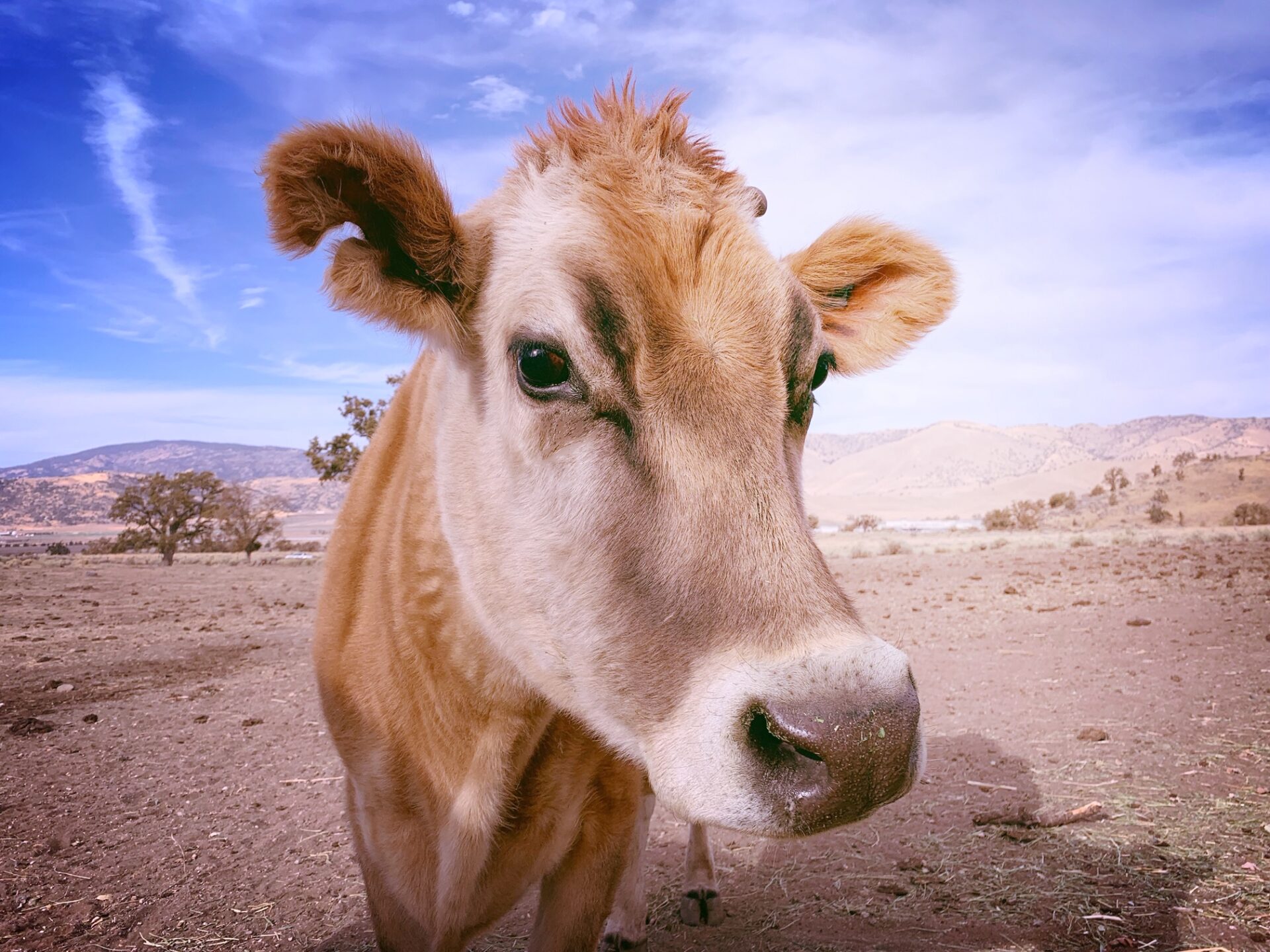 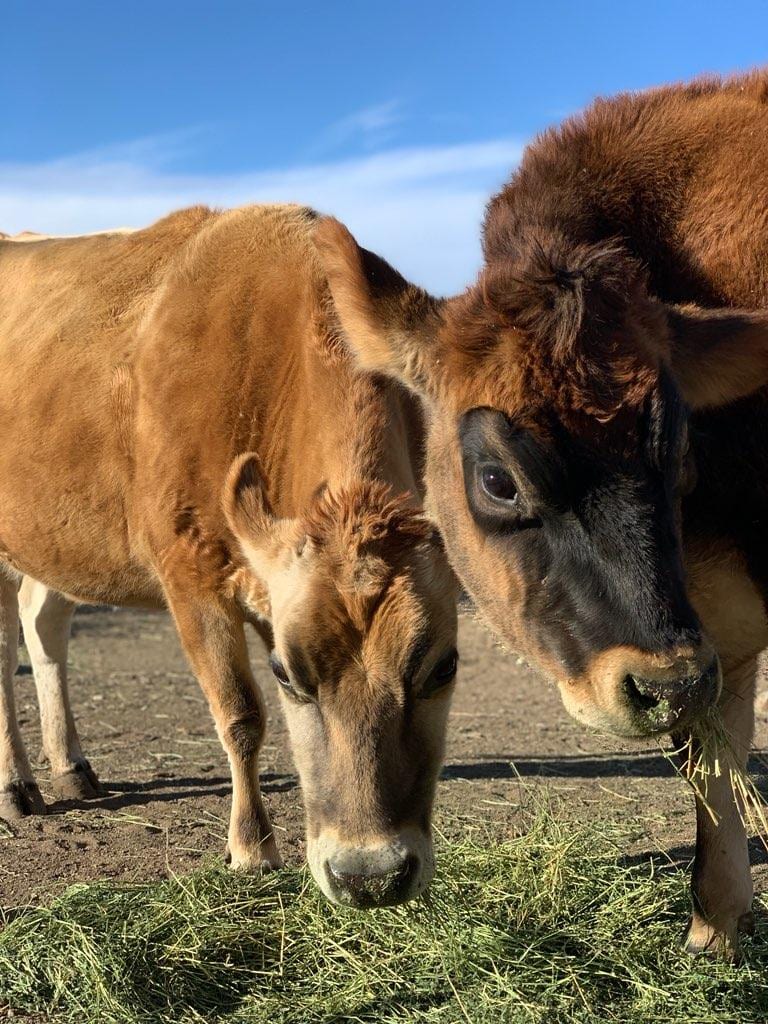